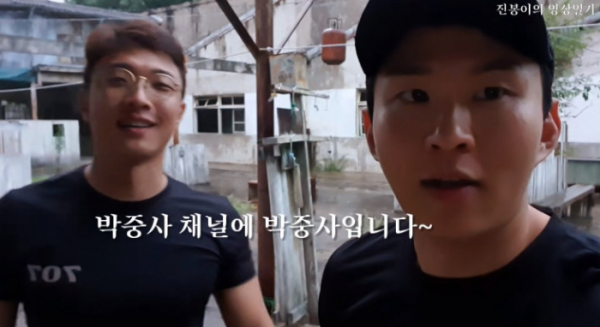 Lee Jin-bong of’Steel Troops’ expressed his position on his close relationship with Park Jung-sa (real name Park Su-min), who has become the center of the recent controversy.

On the 20th, Lee Jin-bong, through his YouTube channel’Jin Bong-i’s Video Diary,’ said, “It is true that he is close to Park Joong-sa. But that doesn’t mean I can’t even know my deep personal life.”

Earlier, on the 17th, Park Jungsa was caught in suspicions of illegal filming and dissemination, harassment, and illegal gambling operations through intensive reports of MBC’s’real story exploration team’. Lee Jin-bong is from the 707 special team like Park Joong-sa and also appeared on Channel A’s entertainment show’Steel Troops’.

In particular, on Lee Jin-bong’s YouTube channel, a number of videos shot by the two were posted, and when he did not delete this video after controversy, an arrow of criticism poured out on Lee Jin-bong as well. Regarding this, he explained, “Don’t hesitate to delete the last video at this point, it seems strange,” he said. “I hope that unfounded suspicions will not arise just because it is not deleted.”

In addition, while acknowledging his closeness with Park Jung-sa, he drew a line saying that he did not know his deep personal life, saying, “Because you are close, the taste and values ​​you pursue cannot be the same.”

Still, he said, “The decision of Park Joong-sa and Son-jeol is my personal relationship,” he said. “I don’t think there is a need to disclose it here. However, I have nothing to do with what was reported on MBC.”

Lee Jin-bong’s position was decided because he was concerned that the color of the channel was changing due to the overwhelming attack. He announced that he would respond strongly to the malicious comments that have exceeded the current time.

Meanwhile, Park Joong-sa got off at the’Steel Force’ on the 13th due to personal circumstances. He announced that he would clarify various suspicions surrounding him on the 26th through his YouTube.