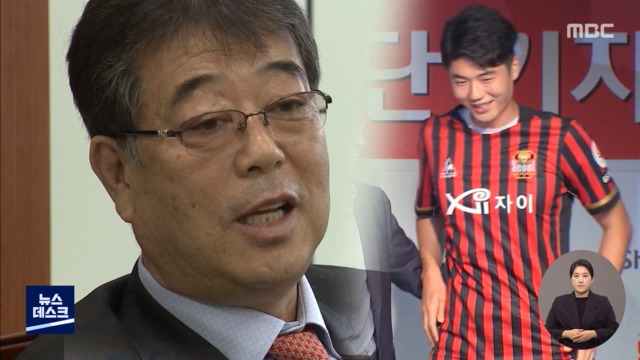 When soccer player Ki Sung-yong was playing in England, he bought farmland with his father in his hometown, Gwangju, and bought a farming plan that he would do his own farming.

Because of this, I was charged with filing a fake plan.

As the mountain farmland has been developed into a park, there are also suspicions of speculation.

When I check one lot, the land use is’Answer’, that is, as a rice field.

It is a farmland that needs to be farmed.

The area is 496 square meters,

By the way, this area is used as a parking place for crane vehicles to come and go.

“You come here, and when you go home, you take your car home. You come here and go out to work with your equipment.”

Equipment used for construction, such as cranes, aerial work vehicles, and excavators, are parked.

After confirming the land owner, he is Ki Sung-yong of Seoul FC.

It is supposed to have been bought in November 2016.

It is known that between 2015 and 2016, former Gwangju FC head coach Ki Young-ok, the father of Ki Sung-yong and Ki’s father, continued to buy over 10 fields in this area.

At the time, they also submitted the’Agricultural Management Plan’ to the local community center to determine what crops to grow and from when.

However, it is difficult to find any traces of actual farming.

Moreover, at this time, Sung-Yong Ki was active in England.

“Mostly we don’t cultivate. For that purpose, we use it as a stand or something like that…”

In addition, the local government judged that 9,610 square meters of land was cut or filled in this farmland and illegally’changed the character’.

It has been confirmed that an administrative disposition has been imposed on the rich man of Mr. Ki to restore the land to its original state.

“The deadline for restoration is on May 30th and the end of May, so we have notified the agent.

The controversy is that a park will be built in a nearby area.

For this reason, the police are investigating Mr. Ki’s rich man for violating the Farmland Law, etc., and is also investigating whether the land was purchased for the purpose of speculation.

Regarding this, it is reported that the former head of the team, Ki Young-ok, explained that he bought the land under his son’s name to build the’Ki Sung-yong Soccer Center’ in the future.

This is MBC News Lee Da-hyun.