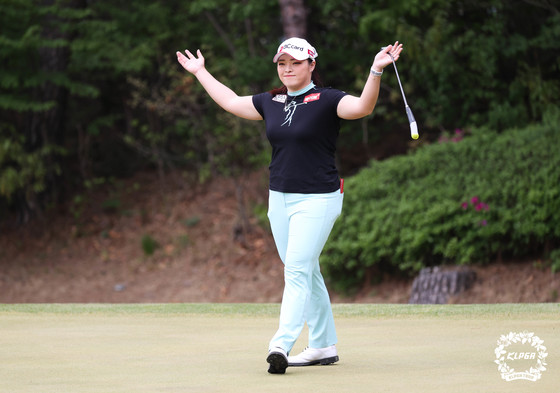 Jang Hana hit a 6-under par 66 with 8 birdies and 2 bogies in the first round of the tournament held at the Gaya Country Club (par 72‧6813 yards) in Gimhae, Gyeongnam on the 22nd.

Jang Hana, who took the lead alone in the first round of the Lotte Rent-a-Car Women’s Open, which was the opening game of this year’s KLPGA, recorded first place on the first day of two consecutive competitions. Unfortunately, it ended in second place in the tournament at that time.

However, experienced Jang Hana quickly overcame the crisis. On the 7th hole (par 4), he reduced one stroke to start rebounding, and then he recorded a birdie again on the 9th hole (par 5), finishing the first half by reducing 2 strokes.

After the game, Hana Jang laughed, “I’m worried that I was driving a birdie on the first day.” I was satisfied.

“In the opening game, I thought to keep the score rather than aggressive play with a strong wind.” “Through the opening game, once again, I realized that golf is a sport that should not be greedy. After the second look at the 6th hole, I emptied my mind. It was helpful,” he added.

One chapter of winter training at Gaya Country Club, where this tournament is held, said, “I felt comfortable as if I was practicing. I didn’t have a long sense of strength,” and said, “Because the wind blows differently in each hole, you have to play without being greedy.” .

Following runner-up in the opening game, Hana Jang, who took the lead in this competition, said, “If you force the race in the beginning, it can be physically difficult in the second half. In the first half, we will do our best with the goal of consistent play rather than the desire to win.”

Lee So-mi (22, SBI Savings Bank), who won the Lotte Rent-a-Car Women’s Open, captured two buddies without seeing it, and tied for 16th with a two-under-par 70 strokes.

Choi Hye-jin (22, Lotte), the protagonist of the KLPGA Grand Prize, who pledged to win in his hometown for three years in a row, marked a tie for 28th with a 1-under par 71 strokes. Defending champion Lee Seung-yeon (23, SK Networks) tied for 46th with 72 even pars.

Meanwhile, Yoo Hyun-ju (27, Golden Blue), a popular female golf star in Korea, participated in this tournament as a recommended player, but after finishing six holes, he declared withdrawal due to symptoms of a throat. Until withdrawal, only two bogies and two double bogies.