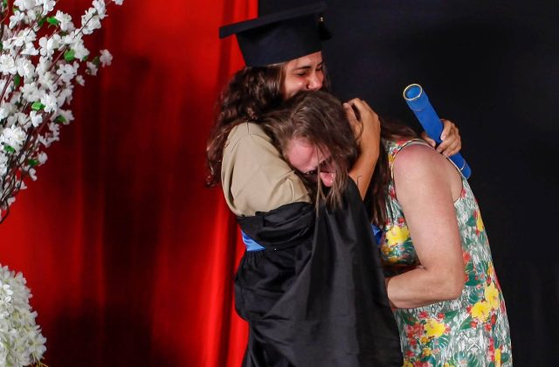 The story of a Brazilian female student who took a college graduation photo wearing her mother’s uniform at the beauty salon is causing a calm impression in the region. On a special day, it was an event prepared to express my gratitude to my mother who supported me by working hard throughout my life. In response to this warm story, a university also offered a scholarship to help her daughter go to graduate school.

According to the local media Globo.com on the 16th, the main character of the story is Roberta Masena. He wore his mother’s smock under his graduation gown. And when the graduation photo was taken, she opened her gown wide and surprised the surroundings. The mother who was accompanied by the filming site was surprised by the unexpected appearance, but soon realized that it was her work clothes and hugged her daughter in tears.

Roberta (left), who took a graduation picture wearing her mother’s work clothes, and his mother embraced and wept. [트위터]

According to Massena, her mother quit school at the age of 13 due to a difficult family environment and jumped into the livelihood front. After that, I got married and got a daughter, but the situation was still difficult. However, with the conviction that only her daughter should be properly educated, she worked as a beauty salon in a building and paid for college tuition.

And on the day that the fruit came to fruition, Massena prepared a’special event’ to thank her mother for her dedication. “My mother is such a great person,” he said. “I wanted to show how proud I am of her.”

The scene of a daughter in work clothes embracing her mother and crying in tears was reported in Brazilian media at the end of last February. And, seeing this, the Metropolitan University of Santos City suggested that Massena go to the master’s degree program and offered a scholarship.

It is said that the mother and daughter shed tears of joy once more when they heard the news of the scholarship payment. Massena, who wants to work as an education expert, wanted to go on to a master’s course, but was unable to make it more difficult after Corona 19.

Roberta (left) hugging her mother during an interview[글로보닷컴]

Massena conveyed her aspiration to the local media, saying, “My dream is to teach children in difficult environments.”

Having learned the story of a mother and daughter, a university offered Roberta to apply for a master’s program scholarship. [트위터]